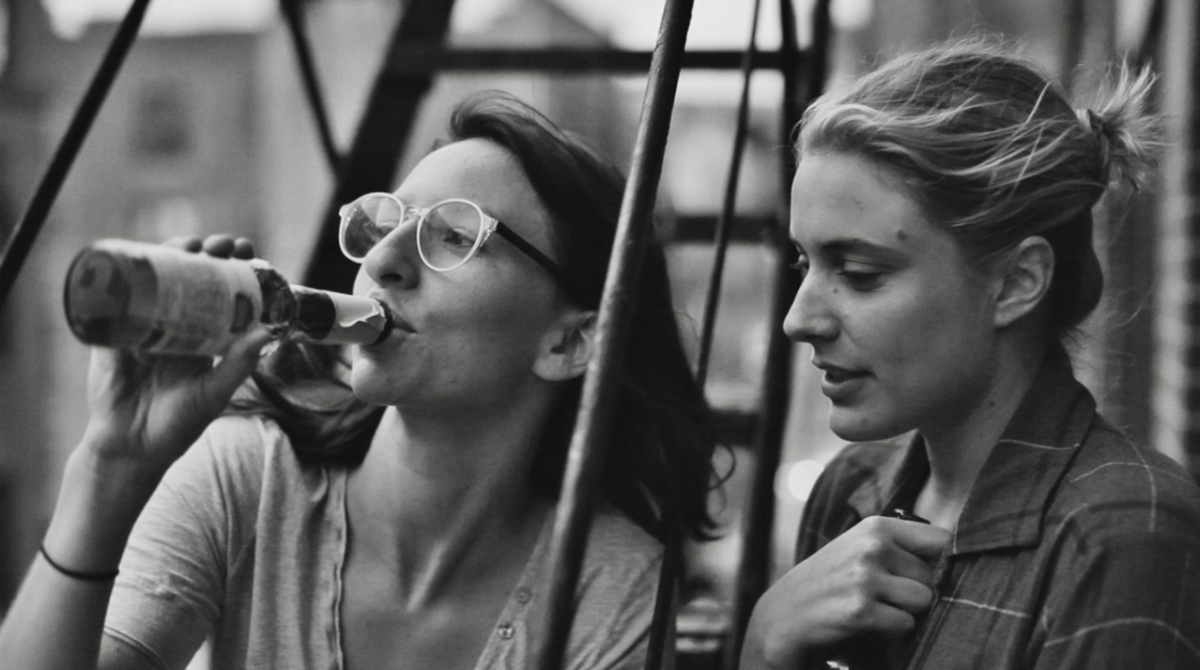 For as much as single “women” prattle on about how utterly shittaytay “men” are, the second one of them manages to finagle a “boyfriend” (generally on the more fey and malleable side if he’s willing to be “pinned down”), all those previous comments about the assholery and uselessness of them fly out the window. In fact, all comments of any kind disappear as you’re never likely to see or hear from your friend again now that she’s secured semi-steady “dick.” And it’s emphasis on the semi comes from the reality that “men” aren’t half as libidinous as women anymore.

You might catch glimpses of your friend now and again at major events like her bridal shower or wedding. If you’re lucky, she might even make a cameo at your birthday party. If it’s a milestone. Especially one like forty, when she can really feel superior about how “Thank god it’s not me who’s still alone at that age.” But maybe what it really is about “women” who get “boyfriends” abandoning their former confidantes is that the primary thing that once bound them together–seeing “men” as little assholes–has vanished. Now you’re the little asshole for attempting to possess integrity in not settling for a “man” just because he was willing to. Then again, there’s also this: you can’t fuck your friend. Unless, of course, she doesn’t end up finding someone and things do get that desperate. As summer, marginal though it might have been with its flickering rays of sunshine prone more to monsoon weather than anything else (at least, on the East Coast, where we set most of the Missing A Clit narrative), the clitless “women” of the world are still trying to get their last “Insta-worthy” photo in before the sun dims out completely and the pool floats accordingly deflate. Who can pinpoint when, exactly, the float craze began? Was it, according to some, when Taylor Swift posted a picture of herself in an inflatable swan in the summer of 2015? Or was it at the very dawn of the commercialization of the pool float, when Madonna appeared on Vanity Fair‘s 1992 cover (pictured below) photographed by Steven Meisel? Granted, the latter was far more tasteful and less grandiose in its puerility.

What it all speaks to is the “female” need that requires an extra level of attention under the guise of simply being “naturally cute.” What, me? I just fell onto this adorable float in my barely-there bikini. I can’t help it. That sort of thing. And regardless of whether or not you find a “man” or several of them to help you complete a larger pizza pie for your aerial photoshoot, the fact of the matter is, there’s nothing that can help your narcissistic soul float to the surface with nearly half the same ease as your overpriced vinyl-crafted prop for contrived vanity. How a pool float should be done How a pool float should not be done Dreadlocks aren’t a good look on anyone: “men,” “women,” black, white–whatever. But the “women” of a Caucasian background that somehow feel obliged to adopt the look for the “Rasta lifestyle” they slip into after smoking weed a few times and securing a black boyfriend à la Julia Stiles in Save the Last Dance are of particular note when it comes to causing offense with this hairstyle. Once they’ve lost the black boyfriend and merely settled on a “casual” white drug dealer in a band, the dreads persist–after all, they’re rather difficult to just “get rid of” once a white girl has committed (a.k.a. possessing gnarly hygiene is so much more comfortable–no muss, no fuss).

Then again, the dreadlocks worn by those claiming to adhere to Rastafarianism aren’t exactly the ones with the monopoly on the looque. Egyptians were the first to lay claim via archaeological evidence to the trend (though many trace its birthplace to India). When Rastafarianism appropriated the tenets of Hindu and African tribal culture mixed with the Old Testament, somehow the black Jamaican population became the only one permitted to sport the style without causing an outrage. And white “girls” are at the top of that list (especially after a Marc Jacobs runway show).

In truth, however, there’s this: just no one wear dreadlocks, ever. It does not enhance your power, as previously thought by the ancients, but merely detracts from it. 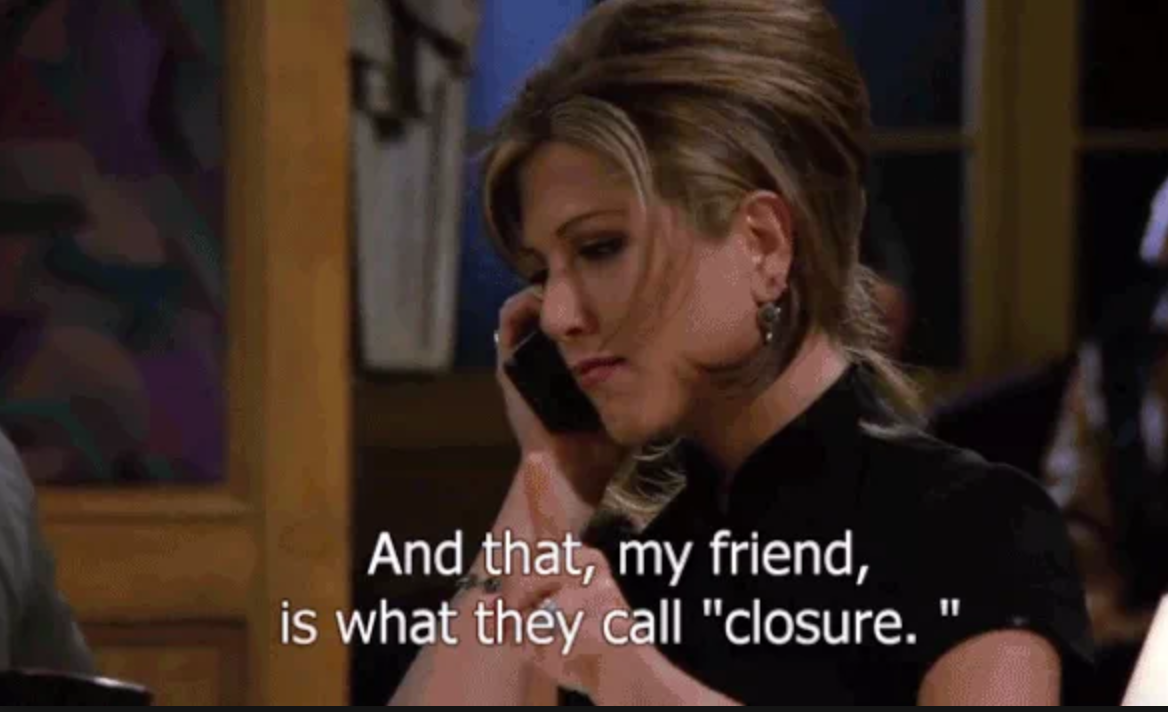 Fact one: you will never, no matter how hard you try, achieve closure. It’s almost more impossible to achieve than orgasm. It cannot happen, most markedly because you’re working with someone who’s internally dead on the other side. It’s not “men’s” fault, one supposes, that they can turn on and off like a light switch in such a way as to make you question how you, too, can transcend into such automaton status. What is “women’s” fault, however is their unquenchable desire to find closure.

Fact two: there’s a reason that one of the definitions of closure is: “a sense of resolution or conclusion at the end of an artistic work.” Note, this can only happen in a work of fiction, not real life. I mean, that’s why we’re all so fucked up, right? Going by the logic of works of art based on the three-act structure has made us believe that life should go in the according same way. “Women,” in particular, are sensitive to this pre-established rule formed by the diet of cinema and Jane Austen novels.

It doesn’t help that the “female” friends these “women” seeking counsel from shower them with bullshit like, “Maybe you can just keep sleeping with him if you want to, but I worry you’re just too emotionally attached.” It’s been said by a certain overly inquisitive fictional columnist that to have sex like a “man” is one of the ultimate “female” coups. This is because when you never fully engage your feelings, you’re at least not going to come out of the end of the prolonged fucking period (sometimes called relationships) looking like anything other than a needy douchebag with binoculars whipped out to find closure. Stop looking, he ain’t gon’ give it to you, just like he barely gave you enough consistent good dick. 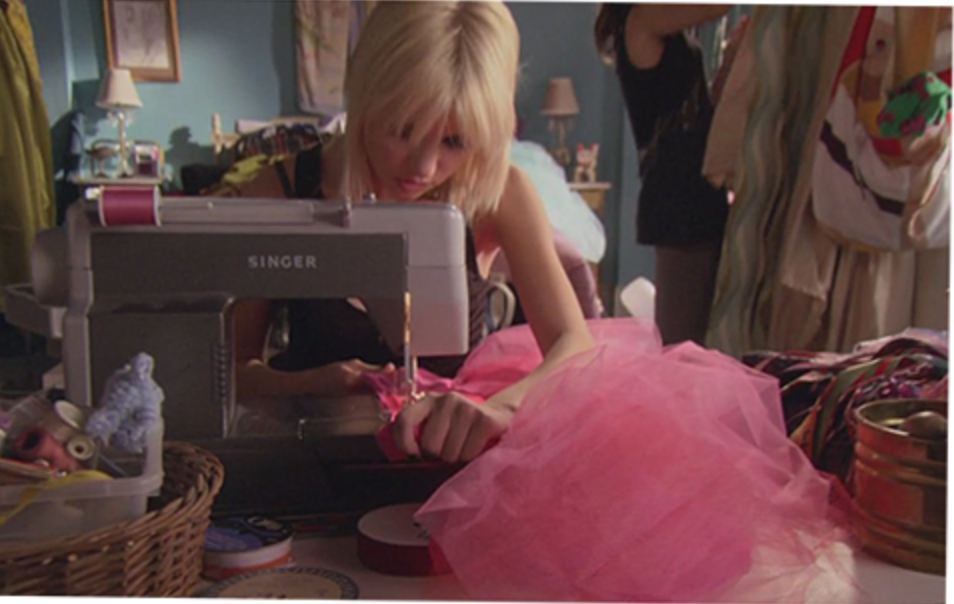 As a young “girl,” it’s all very cute to play dress up, whether in the clothing of your mother or with one’s Barbie dolls (occasionally making her nonexistent genitalia touch against Ken’s bump to pre-experiment with sex in a way you don’t fully understand, but sort of just innately know is somehow illicit). But telling people your plans to be a fashion designer after the age of fifteen instead of tragically falling into the field like Donatella Versace is more than a little bit naive, and well, completely self-indulgent in a way that only white “women” can be.

And because the “woman” pursuing fashion in question is probably the daddy’s girl with the corresponding car to prove it, she’ll end up going to one of the mac daddies of missing a clit schools: Parsons or FIT. The costs of which will never be equal in measure to the middling salary a “woman” will get post-graduation. Then again, most “women” with the “creative” and “fanciful” spirit to choose such a major have no problem dropping their “passion” when a better offer (read: a “guy” or higher paying job in an even more soulless profession) comes along. Plus, the “glamor” of making one’s own clothes suddenly doesn’t feel that way when the true technical aspects of working in the fashion industry are put into practice. Because what do you really end up doing? Working some thankless 60k job for a Jewish-owned company where staring at templates for shitty clothes in the endless genre of recycled trends will never give you the credit you thought you were going to get. The international brand you thought you were going to have on all the major stretches of road: Rodeo, Madison, Montaigne and Vittorio Emanuele. So wake up little “girl,” it’s time to stop playing dress up and buying pumpkin spice lattes on the way to your hopelessly out of date office building located somewhere in the bowel of Seventh Avenue and start reconciling that unlike Anne Hathaway in The Devil Wears Prada, there is no way to break through the periphery of the fashion realm. I just sat down by myself to relish the near beatificness of my sadness, where a “man” was also happening to sit as well, because people tend to commingle in public places in this sort of manner. We get to talking because he asks me what I’m reading, his British accent readily making itself apparent. I ask him if he’s Scottish, because I hate Scottish people right now (regardless of how much of this descent went into creating Lana Del Rey). He tells me no, he was born in London. It’s around this instant that his girlfriend swoops in like an eager vulture to ensure that another doesn’t peck at her bounty. Some “women” like to feign pleasantries with the other “woman” they’re threatened by–get on her good side so as to keep her enemy closer. This “woman” didn’t feel bothered to do so, instead treating me like a predator, or perhaps worse, vermin to be exterminated.

Please calm down, I do not want to fuck your boyfriend. Your boyfriend probably has crust resin on his dick and inside of his asshole. I almost admire you for putting up with him the way you seem to be able to, invariably so doing primarily because of the unfortunate ratio in life and in New York City. It’s very limiting in choice and can transform “women” into even worse versions of themselves when their claws instinctually come out to protect what they’ve worked so hard to secure (this can mean everything from not allowing herself to get fat to practicing head-giving skills on bananas–even though mangoes would be more appropriate for most of the chodes out there). But it’s important to remember, most “women” are probably just as unimpressed with your boyfriend as you are. No one wants to steal your slim chance at lasting monogamy. And if they do, rest assured it’s the “man” you’re dating who is giving out the signals of invitation for them to “attack.”