Though, long ago, the snuggie was bad enough in terms of enduring what was to be seen/interpreted of a “woman,” it didn’t evolve into its most complete grotesque proportions until the advent of the mermaid blanket, most specifically peddled by a company called Blankie Tails (try not to let your gag reflex kick in over that name), created by, um, “Chief Mermaid Enthusiast,” Hattie Peze, back in 2015. Incidentally, the company that brought you the snuggie–Allstar Marketing Group–would also attempt to take credit for innovating what they rebranded as the “mermaid snuggie.” The sight of this frenzied competition over how best to help a “woman” tap into her most profound inner douchebag was harrowing, to say the least–especially for those perched on the sidelines in normal blankets. And, worst of all, it has continued to force us all to watch a grown “female” make her best attempt at returning to the womb the way a “man” does every day simply by existing.

It doesn’t help matters that the mermaid trend is one that seems to be perpetually in our midst, along with its compatriot, the unicorn, which is anything but rare (the way a unicorn ought to be) these days with its pervasiveness on phone cases, drinks and the cups they come in, clothes, accessories and anything else a company can print on. It’s almost as though these two entities, especially when combined, are the prerequisite for type of “woman” who is not only a foul representation of the gender, but also the exact type of “woman” most likely to have a boyfriend. Because to be generic in one’s “free-spiritedness” and “fun-lovingness” is to attract the last of the “straight” “males” still seeking a “girl” that at least doesn’t overly rock the boat with her verbosity in a post-#MeToo epoch. And how else is a “man” going to justify being close enough to a mermaid blanket to potentially get in one himself? Maybe even finagling his “girl”friend to buy him a matching one for potential Instagram photoshoots touting the new zenith of their coupledom? 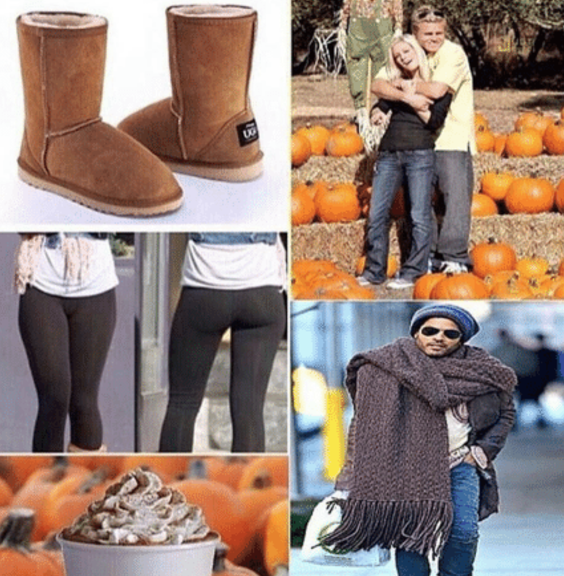 As fall descends upon us, the endless hype leading up to what has officially been dubbed “basic bitch season” is about to reach a fever pitch in the coming weeks. The first signal, regardless of how the climate actually feels, is Starbucks deciding to re-inaugurate one of its bestselling drinks, the pumpkin spice latte, which typically always occurs during the first week of September (they’ve got to cash in on it for as long as possible, after all). Once this event is heralded, there’s no stopping the rest of the steam roll that is the fall accoutrements a particular sort of “woman” just adores.

And even though the exact period and duration of fall may change with increasing rapidity over time as the apocalyptic patterns of the weather mirror the imminent demise of humanity, you can always count on fall’s “female” dick suckers to adhere to the usual uniformed reverence: oversized sweater, painted-on leggings and Uggs (or some knockoff form of them). Equipped with her hot beverage in hand, there is no man the fall-loving “woman” can’t corral into her bedroom (packing, undoubtedly, Ralph Lauren sheets) just in time to have someone–anyone–to cuddle up with for the winter. Requisite trips to the pumpkin patch where infinite photos will be taken so that only the perfect one can appear on Instagram are also mandatory fall protocol. Summer be damned, fall is the time when “women” get at their most understatedly slutty–one wouldn’t be surprised if you caught her actually fucking a leaf as she rolls around “just so” in one of the piles before sipping from a mug of hot cider that makes her giddy with elation almost as much as the pumpkin spice.

Then, of course, to top it off, is Halloween: the granddaddy of all “female” love for fall since, as Cady Heron said, it is “the one night a year when a girl can dress like a total slut and no other girls can say anything about it.” Testing the very thin limits of her creativity, this usually means the fall lover in question will don whatever is most trending pop culturally from the year. In 2017’s case, Missing A Clit predicts the simplicity of Taylor Swift’s black shag “Rep” sweater from “Look What You Made Me Do.” And it’s not just because she’s the satyr to basics, but also, well, it just gets so chilly with only shorts and heels on. So if you’re a man who, by now, hasn’t learned to worship fall, maybe there’s a reason you’re single–and it’s not just because you’re poor.